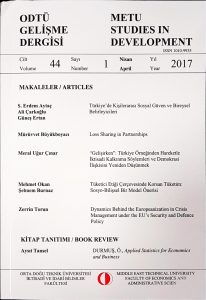 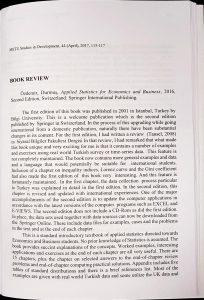 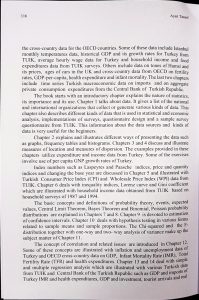 The first edition of this book was published in 2001 in Istanbul, Turkey by Bilgi University. This is a welcome publication which is the second edition published by  Springer in Switzerland. In the process of this upgrading while going international from a domestic publication, naturally there have been substantial changes in its content. For the first edition, I had written a review  (Tansel, 2008) in  Siyasal Bilgiler Fakultesi Dergisi In that review, I had remarked that what made this book unique and very exciting for me is that it contains a number of examples and exercises using real world Turkish survey or time-series data.  This feature is not completely maintained. The book now contains more general examples and data and a language that would potentially be suitable for  international students. Inclusion of a chapter on inequality indices, Lorenz curve and the Gini coefficient had also made the first edition of  this book very  interesting. And this feature is fortunately maintained.  In the first chapter, the data collection  process particular to Turkey was explained in detail in the first edition. In the second edition, this chapter is revised and updated with international experiences. One of the major accomplishments of the second edition is to update the computer applications in accordance with the latest versions of the computer  programs such as EXCEL and E-VIEWS. The second edition does not include a CD-Rom as did the first edition. In place, the data sets used together with data sources can now be downloaded from the  Springer Online. These include data files for examples, cases and the problems in the text and at the end of each chapter.

This is a standard introductory textbook of applied statistics directed towards Economics and Business students. No prior knowledge of Statistics is assumed. The book provides succint explanations of the concepts. Worked examples, interesting applications and exercises at the end of each chapter are all very useful. There are 15 chapters, plus the chapter on selected answers to the end-of-chapter review problems and end-of-chapter computing practical solutions. Appendix includes five tables of standard distributions and there is a brief references list. Most of the examples are given with real world Turkish data and some utilize the UK data and the cross-country data for the OECD countries. Some of these data include Istanbul monthly temperatures data, historical GDP and its growth rates for Turkey from TUIK, average hourly wage data for Turkey and household income and food expenditures data from TUIK surveys. Others include data on tones of Hamsi and its prices,  ages of cars in the UK and cross-country data from OECD on fertility rates, GDP-per-capita, health expenditure and infant mortality.The last two chapters include  time series Turkish macroeconomic data on imports  and on aggregate private  consumption  expenditures from the Central Bank of  Turkish Republic.

The book starts with an introductory chapter explains the nature of statistics, its importance and its use. Chapter 1 talks about data. It gives a list of the national and international organizations that collect or generate various kinds of data. This chapter also describes different kinds of data that is used in statistical and economic analysis, implementations of surveys, questionnaire design and a sample survey questionnaire from TUIK. This information about the data sources and  kinds of data is very useful for the beginners.

Chapter 2 explains and illustrates different ways of presenting the data such as graphs, frequency tables and histograms. Chapters 3 and 4 discuss and illustrate measures of location and measures of dispersion. The examples provided in these chapters  utilize expenditure and income data from Turkey. Some of the exercises involve use of per capita GNP growth rates of Turkey.

Index numbers such as Laspeyres and Paasche  indices, price and quantity indices and changing the base year are discussed in Chapter 5 and illustrated with Turkish  Consumer Price Index (CPI) and  Wholesale Price Index (WPI) data from  TUIK. Chapter 6 deals with inequality indices, Lorenz curve and Gini coefficient which are illustrated with household income data obtained from TUIK  based on household surveys of 1987 and 1994.

The basic concepts and definitions of probability theory, events, expected values, Central Limit Theorem, Bayes Theorem and Binomial, Poisson probability distributions  are explained in Chapters 7 and 8. Chapter 9  is devoted to estimation of confidence intervals. Chapter 10  deals with hypothesis testing in various forms related to sample means and sample proportions. The Chi-squared and  the F-distribution together with one-way and two- way analysis of variance make up the subject matter of Chapter 11.

The concept of correlation and related issues  are introduced  in Chapter 12. Some of these concepts are illustrated with inflation and unemployment data of Turkey and OECD cross-country data on GDP,  Infant Mortality Rate (IMR),  Total Fertility Rate (TFR) and health expenditures. Chapter 13 and 14 deal with simple and multiple regression analysis which are illustrated with various Turkish data from TUIK and  Central Bank of the Turkish Republic such as GDP and imports of Turkey IMR and health expenditures, GDP and investment, tourist arrivals and real exchange rate from Turkey.  The last chapter is Chapter 15  which is an introduction to analysis of time series. It is illustrated with quarterly data on private expenditures and quarterly data on currency issued  in Turkey.

I congratulate the author, Durmus Ozdemir  for this contribution with clear explanations and  interesting applications. I recommend this book for introductory Statistics courses. The book is in English but, it can easily be incorporated  into the reading lists of Turkish Universities which may be instructing in English or in Turkish.